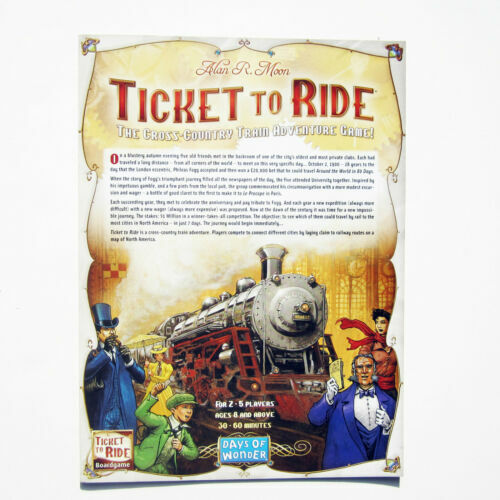 Ticket to Ride is a board game from publisher Days of Wonder that is played all around the world. Rides turn-based game play and strategy are intended for two to five players, and endless variations of the routes and combinations of train destination tickets can make this game fun to play for hours on end. There are many parts associated with the complete game, including tiny plastic trains colored in five different shades, a set of train cards for claiming routes, a set of train cards for destinations, and small wooden components to keep score with.

In the basic version of Ticket to Ride, there are four distinct types of destination tickets and other segments on the board. With expansion packs, you can add some more ways to ride, depending on the map and game version you are playing.

Content provided for informational purposes only. eBay is not affiliated with or endorsed by Days of Wonder.