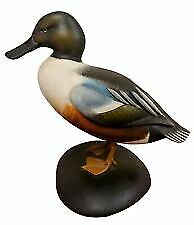 By the 1920s, making duck decoys had progressed to an art form with beautiful decoys being carved from locally available materials. While hunters used hand-carved and machine-made decoys for many years, many were made as decorations for their yards. The era of using duck decoys ended in the 1950s when a law ending commercial hunting was passed in the United States; however, vintage duck decoys can still be found.

What are duck decoys used for?

Duck decoys were carved from real wood or made from plastic in the shape of a real duck. North American hunters placed up to 100 decoys in an area where they intended to hunt in an effort to attract real ducks. While the name duck decoy is universally accepted, they were used to attract a variety of birds with those resembling wood duck, teals, pintails, and mergansers, along with those shaped like other shore birds.

Who were some notable carvers of duck decoys?

While many people hired a local woodcarver who also made axe handles, tools, and many other things from wood, there were some individuals who specialized in making wooden duck decoys. Some names included:

What were some of the factories making duck decoys?

In addition to those operating individual operations, many people worked in factories making duck decoys. One of the most notable was the Masons Decoy Factory in Detroit, Michigan, where carvers produced over 1,000 decoys resembling mallards, canvasbacks and scaup, squaws, swans, scoters, wood ducks, crows, and doves. Another factory operating at the same time was L.L. Bean, which sold over 1,000 decoys created by George Soule annually.